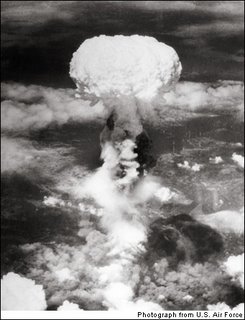 Nothing like the mushroom cloud had ever been seen, not by the general public. It was a suitably awesome image for the power unleashed below. On August 6 the first atomic bomb killed an estimated 80,000 people in the Japanese city of Hiroshima. There was no quick surrender, and three days later a second bomb exploded 500 meters above the ground in Nagasaki. The blast wind, heat rays reaching several thousand degrees and radiation destroyed anything even remotely nearby, killing or injuring as many as 150,000 at the time, and more later. As opposed to the very personal images of war that had brought the pain home, the ones from Japan that were most shocking were those from a longer perspective, showing the enormity of what had occurred.